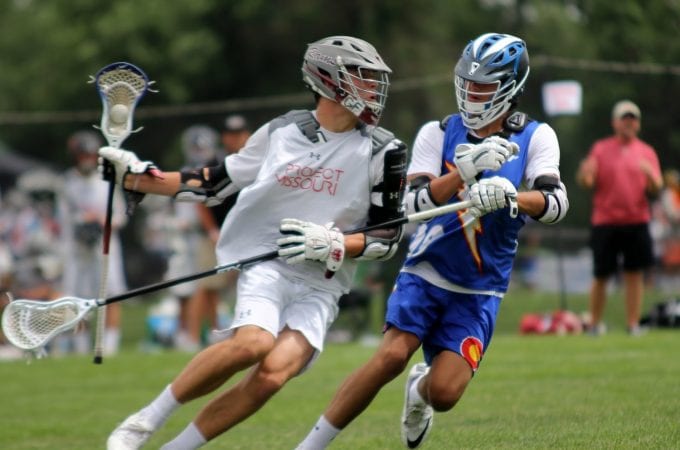 goal oriented: henry carpenter
When Henry Carpenter was just a freshman on the MICDS lacrosse team, he jumped right into the midfield and helped lift the team to its third consecutive state title. Now, the 6-foot, 185-pound sophomore has been playing linebacker on the football team, but still keeping his lacrosse skills sharp. Just last month, Carpenter went to a prospect camp at Penn State. He played four games in one day, shining among the other high schoolers in attendance. A few days later, Penn State offered him a scholarship. “There’s kind of a lot of pressure,” he says, “but it’s such an honor to be wanted. I want to meet their expectations of me.”

Carpenter will travel all winter with his club team, Project Missouri. Last summer, he also made the Under Armour Midwest Region team. MICDS lacrosse coach Andy Kay coaches Carpenter’s select team, as well as the Under Armour all-star team. “I hesitated about going to the region team last summer,” Carpenter says. “I wondered if I could even make it, but I thought a little more lacrosse wouldn’t hurt, so I went. I ended up dominating the tryout. During a tournament in Maryland with that team, college coaches really started to notice me.”

The kid who started playing lacrosse in fourth grade cannot imagine days without it now. On the rare nights he doesn’t have practice, he shoots at the net in his backyard. He wants to do all he can to help lift MICDS to its fourth consecutive state title this spring. “I remember my first season in fourth grade; my teammates were scoring goals in every game,” Carpenter says. “I scored just one the entire season. It did not come easy. But as I started scoring more, I really started getting into it. It’s just such a fast-paced sport and it’s such a fluid game. It’s my sport.” power hitter: kelsey lenox
When Marquette junior Kelsey Lenox walked up to bat against Webster Groves on Sept. 30, she just wanted to make contact and move her teammates ahead on the bases. She did that and a little more. Spotting perfect pitches in three at-bats, Lenox used her power to hit three home runs and drive in six RBIs to lift Marquette to a 15-4 victory. “I just drove right through those pitches, and it was exciting,” she says. “My teammates were so hyped up. Sometimes I think they get more excited than me when I hit home runs!”

Her teammates had plenty to celebrate this year as Lenox led the entire St. Louis area with 15 home runs. Lenox, who also plays with the premier select team Chaos 99, hit her first when she played 14U ball. But it wasn’t until this past year that she really focused on becoming a better power hitter. “With Chaos, we do a lot of CrossFit-style workouts that have really helped,” she says. “My hitting lessons have helped too, and just the repetition I get working out on my own.”

Lenox does more than just hit. She is a defensive standout behind the plate. Focusing primarily on catching since sixth grade, Lenox tries to model her game after Cardinals catcher Yadier Molina. “Behind the plate, I can see everything my teammates can’t, so I try to be a vocal leader. I know if I have a bad attitude or am not doing well, it reflects on all my other teammates, so I aim to be the best and most positive leader I can be.”

Lenox, who will play in front of recruiters all season with Chaos, hopes to continue playing in college. “I love the atmosphere at games and the sport in general,” she says. “There are so many life lessons it teaches you, like coming back from failure. I spend my summers traveling the country playing ball, and I can’t imagine anything better.” talk to … lauren reding
As one of three seniors on the state’s top-ranked St. Joseph’s Academy volleyball team, middle hitter Lauren Reding is doing all she can to bring a state title back home. She has 137 kills this season and 127 blocks. Reding has played for Rockwood Thunder volleyball club since she was 9 and has verbally committed to play volleyball at Rockhurst University in Kansas City next fall.

Q | What have you done this season to help lift you among the top blockers in the area?
A| I have never played middle hitter at the club level; I am always an outside hitter. When I got to high school, however, my coach put me in the middle, and blocking was one of the hardest things to learn. In the middle, you have to be in on every play. So at every practice, I’d be doing wall work for an hour. My freshman and sophomore years, I was still struggling and I thought, ‘What is the point?’ But it clearly paid off. I’ve come so far, thanks to my coaches and the practices they created for me.

Q | What would it mean to win a state title your senior year?
A| It would be insane. I have an ongoing competition with my brother. He’s very smart, but he has never won a title, and he played lacrosse and hockey at SLUH. It would be good to top him in that. Plus, St. Joe has won titles in the past, but we haven’t done it since I have been here. It’s just a matter of not beating ourselves because I believe we really have the best team in the state.