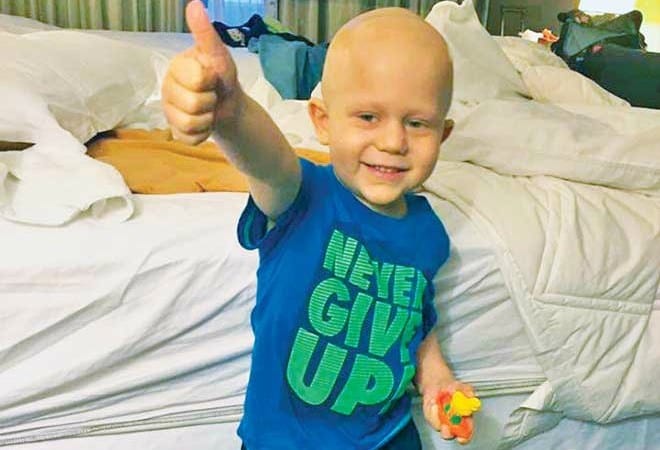 Erica Polston finds joy in the details, in the little things often lost in the shuffle of a carefree life. Her son has acute lymphoblastic leukemia (a childhood blood cancer) and the sound of his laughter—when he’s well enough to laugh—literally is music to her ears. Gabriel is only 3, but his mother says there are things about him, ways he has, that speak to an older soul. “When he’s at the hospital and hears a baby crying, he wants to comfort her,” she says. “He knows what the baby is going through. He knows how she feels.”

Gabriel was diagnosed with the disease in January of 2015 and has been under the care of doctors at SSM Health Cardinal Glennon Children’s Hospital since August of last year. The Polston family home is in Fulton, Missouri, so obtaining the treatment he needs has meant living out of suitcases and sleeping on makeshift hospital beds. During the course of treatment, Gabriel had a bone marrow transplant, requiring him to live close to Cardinal Glennon for at least 100 days in case of complications. So his mom and he moved into a temporary Ronald McDonald House apartment near the hospital. Meanwhile, his dad, Jeremy, stays behind to work, traveling 100 miles each weekend to be with his wife and child.

Polston says for someone so young, Gabriel has some understanding of his condition. From time to time, he will incorporate illness into his games, pretending that his toys are going for bone marrow transplants. “It comes out in subtle ways,” she says. “And it’s then that I get a sense of what he knows. It’s very hard.”

Still, she remains positive and says the experience in many ways has been “a gift. It sounds funny to say, but it has been so valuable and incredibly enlightening,” she admits. “I’ve learned that the things I thought were so important really aren’t. It completely changes your perspective. Who cares if the house is a mess!”

In February, Gabriel had a relapse and needed to resume chemotherapy. After spending March and April at Cardinal Glennon, he and his mom packed their bags and moved again, this time to the Mid-America Transplant Family House off Oakland Avenue, where they remain in temporary lodging until later this month. Then, Gabriel will travel to Philadelphia to take part in a T-cell clinical research trial. He currently receives chemo two to three times a week.

Over the course of his illness, Gabriel has had treatment at three different hospitals, “but none,” his mother says, “has provided Cardinal Glennon’s level of care.” A few weeks ago, as the result of chemo, the toddler went into anaphylactic shock. “We thought we were losing him,” his mom remembers, “but his doctors brought him back. They are absolutely phenomenal.”