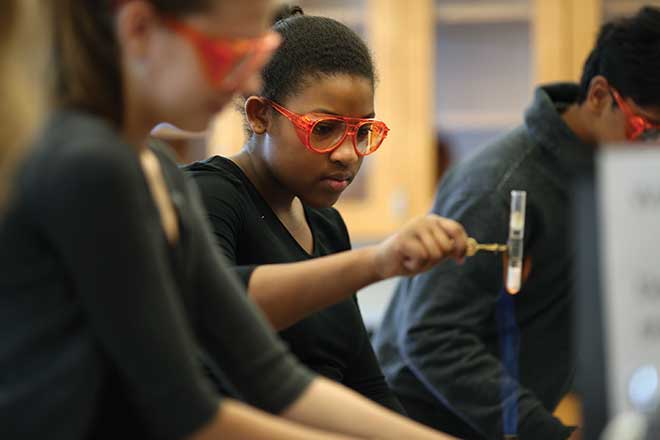 Lately there’s been a lot of talk about the importance of STEM, shorthand for Science, Technology, Engineering and Math. Schools say improving their offerings in these areas will ensure that students are prepared for the future. But has the increased focus on STEM detracted from the humanities? Two local schools with standout programs say not at all: Stepping up their STEM game has improved the educational experience across the board.

[micds]
MICDS reviewed its curriculum around five years ago to see where it could be improved. The result: a smarter way to approach all topics—not just STEM courses. The school found that although students who were interested in science really enjoyed the science courses, improvements could be made to engage other students, too. “We’ve transformed the curriculum so that kids who didn’t self-identify as being interested in science would still find the topics compelling,” says head of school Lisa Lyles. “It’s resulted in a better way to teach these topics for all kids.”

Now, STEM courses are more integrated. Instead of studying math and science as stand-alone classes, they are being combined whenever it makes sense. “The divisions we imposed on science to separate the disciplines from mathematics had practical reasons, but in reality the interesting work for both students and scientists happens in between those spaces,” Lyle says. Photo courtesy of The Wilson School

[the wilson school]
At The Wilson School, an increased focus on STEM has made the curriculum more flexible, allowing teachers to collaborate on projects and offer integrated instruction and learning. Many student projects combine elements of multiple areas of study.

One example is the first-grade science unit on insects, which incorporates art, engineering and technology. “The students did research using computer and library books, and we discussed what is a reliable resource,” says Melika Panneri, who was named a 2015 Independent Schools of St. Louis Teacher of Distinction for her work in integrating technology throughout the school’s curriculum. Students then created their own made-up insect with clay, determining its diet, habitat and adaptations. The final component to the unit was hosting a Bug Museum using an augmented reality app to bring the students’ bugs to life with sound and visuals on an iPad.

Integrations like this mean increased student engagement: Even if a student doesn’t consider themselves interested in science, they might still be excited for the art or technology portions of the project, for example. “By providing multiple hands-on opportunities to demonstrate key concepts, students are better able to retain and call upon what they’ve learned,” says social studies teacher Kevin McGinnis, who leads a unit on Vikings that incorporates social studies, technology and art.

[impact on humanities]
Both MICDS and The Wilson School say focusing on their STEM offerings has made everything better. By examining how to engage students in science class, other topics are being approached in more creative ways, as well.

MICDS’ trimester schedule, for example, allows for more electives, which means students can pursue their interests more easily. And the electives aren’t just STEM, of course. They run the gamut from botany to presidential politics. “What we’ve created is a new approach to thinking about how kids construct a transcript,” Lyle says. “Besides the core requirements, we now provide opportunities for students to either graze broadly or gorge deeply into areas they’re passionate about.” One MICDS student, for example, graduated with 21 trimesters in history, the equivalent of seven years. That meant he always took the maximum number of courses, and every time he had a free slot, he chose history,” Lyle says. “Our registration across the board has increased, not only for AP courses, but also for applied science, history and language courses.”

At The Wilson School, STEM is used to enhance the learning experience in all subjects, and projects often will combine many disciplines. “In elementary school, we are uniquely equipped not to lose sight of how important it is to read and write and make sure you are bringing culture into the experience,” says head of school Thad Falkner. “We’re excited about the movement in STEM, because we believe it addresses a lot of what is necessary for the 21st-century workforce. It’s important for kids to have foundational learning, but some of the educational models of the past don’t support the ideas of critical thinking, creative problem solving and collaboration.”