Two things are indispensible for a trip to Oslo: your stamina and your charge card. The first is needed to traverse the fascinating, but far-flung sites; the second to cover the considerable sums needed for sustenance along the way.

First and foremost, you’ll want to experience the city’s grand Viking history and its legacy of Polar exploration. Both give you a sense of the culture. This is a hardy folk; they’d have to be, given the unforgiving climate: seven months of cold, with temperatures averaging from the teens to the 20s, and about 60 days of nearly round-the-clock sunlight.

Thirty-six hours in Oslo is enough time for museum visits, a boat ride to Bygdøy and five of its six museums, several ‘fiske’ (fish) meals and stroll-till-you-drop walks along the harbor. It’s an easy city to navigate, especially the central museum area. Whenever we asked someone which bus to take, they animatedly told us, No, no, it’s just a little walk. So we stopped asking and started walking. (Note: ‘little’ is a relative term).

A visit to Frogner Park is a good way to see how Oslo-ites live. A large city park with pool, playgrounds and picnic areas, it is well-used by both families and individuals. Its main draw for tourists is the spectacular display of sculpture by Gustav Vigeland. In fact, it’s the site that was most recommended to us by friends who had already been to Oslo. Massive sculptural figures, predominantly of nude men, line a long pathway and are engaged in various aspects of human activity, from bouncing a child to embracing a woman. At the far end is a large fountain whose base is also made of Vigeland bodies, and beyond that, a stairway to a tall, rather phallic pillar constructed of human bodies. The entire collection is art, philosophy and nature all in one.

If you’re a history buff, don’t miss Akershus Castle, an imposing compound along the wharf. Part fortress, part royal home, it is composed of several structures on lovely grounds you can stroll. Entrance to the castle itself, where a uniformed young man stands guard, is about $10, or free with an Oslo pass (which I highly recommend purchasing). The self-guided audio tour takes you into dungeons and banquet halls, some dating to the 13th century. You’ll learn about Haakon VI of Denmark, invited to rule the newly independent Norwegian nation in 1905, and Christian V, who patterned the castle after fine European capitals in an attempt to modernize Norway in the 17th century.

Even if you have no interest in Vikings, do not skip the remarkable Viking Museum on Bygdøy, a district best reached by ferry from the harbor. The public ferry, Batservice, is also free with the Oslo card. It’s about a 15-minute ride in a crowded boat, but it’s all part of the Oslo experience. Once the ferry lets you off at Bygdøy, street signs make it very clear which way the museums are. There are six here on Bygdøy, but the walk between them isn’t too grueling by Norwegian standards. And the occasional ice cream parlor along the route helps take the edge off!

At the Viking Museum, you’ll see excavated ships from about the year 800 A.D.—really. These are massive log boats engineered so perfectly that the Vikings navigated waters from Russia to North America in them. When you see how simple and exposed the ships are, you will truly marvel at how these men could live in an environment with so few ‘amenities’—where did they sleep, eat, relax? As the forebears of such hardy folk, maybe they didn’t!

Not to be outdone, more recent Norwegians have made their marks in the sea, as well. Foremost among them were the polar explorers, starting with Fridjof Nansen, who took the famous ship Fram to the Arctic Ocean. Following him was the legendary Roald Amundsen, who sailed on the Fram to the South Pole, as well as helmed the Gjoa to the Northwest Passage. Both ships can be viewed in all their glory at the Fram museum on Bygdøy. And if, like me, you start out thinking that walking around a 19th-century exploration ship is an activity best suited to pre-adolescent boys, you will certainly be pleasantly surprised at how thrilling it is to see Amundsen’s reindeer skin coat and Nansen’s mukluks.

For thrills of another sort, there’s the Folk Museum, also at Bygdøy. This part of the world is big on what they call ‘outdoor museums,’ spacious areas where historic structures are relocated as a way to preserve a country’s cultural heritage. Here you’ll find old Norwegian farmhouses from different periods, including several with the traditional sod roofs— literally grass and flowers growing from soil on the roof. The sod is a good insulator, but the key is the birch bark frame underneath, which is waterproof. The sod merely keeps it in place. Of special interest as an example of a ‘town residence’ is the Merchant’s Home, an 18th-century structure patterned after the finest English and French homes of the period, which is what the affluent owner, shipping merchant David Chrystie, could afford. The guide said that when Chrystie’s eldest daughter married, he hosted a party lasting 121 days! Be on the lookout for folk demonstrations when you visit. You might get to see authentic Norwegian dances or bread baking here.

After all that touring, you’ll need some sustenance, and if you want to do it Norwegian style, you’ll ignore the quayside TGI Fridays, Starbucks and Burger King (really!) and choose one of the authentic cafes along the harbor. Menus are posted, and diners—locals and visitors alike—fill the tables drinking beer and peeling shrimp. If you want to go traditional Norwegian, choose the creamy fish soup (with emphasis on creamy), the salmon (served with creamed peas and fried potato wedges), or the baked cod. And of course there’s always ‘fresh Norwegian prawns,’ which come cold, head-on and actually are not large prawns but rather tiny shrimp—fresh-caught and very sweet, even if it does take you all night to peel and eat them.

As for cultural attractions, you’ll want to at least walk around the ultra-modern Norwegian National Opera & Ballet on the wharf. Built in 2012, it’s an architectural feat with a slanted roof you can walk all around. And at the National Gallery, you will figure out almost immediately why everyone is heading for gallery 18: it’s a room dedicated to the work of Edvard Munch, the famous creator of The Scream and other astounding turn-of-the-century artwork. If you want to take home a little bit of Oslo, the museum shop has trays, spatulas and other paraphernalia depicting the famous image. Hard to believe it was created in 1893; World War I had not even occurred—was Munch prescient? For more Munch, hop on the bus to the Munch Museum, an entire building dedicated to Norway’s most-renowned artist.

The pedestrian promenade, Karl Johans Gate, is pretty much tourist central, with recognizable shops and eateries catering to the tourist trade. Unfortunately, that also means panhandlers, which you will definitely encounter in Oslo. But near one end of the boulevard is the lovely Oslo Domkirke, Oslo Cathedral, a Lutheran church that exemplifies the common sense frugality of this nation. Built in 1697 but restored over the years, it is regal in its simplicity, with wood-carved figures staring down from the organ area and instructive murals adorning the ceiling. We were lucky enough to walk in during an organ concert with a soprano soloist, open and free for all to enjoy.

While you’re more likely to get cool weather than not, keep in mind that Norway is not air-conditioned—that includes most hotel rooms. When we called the front desk to find out how the air-conditioning worked during our 80-degree stay, they sent up a desk fan. And don’t expect spacious rooms, even at upward of $300 a night. The doors to our room and our bathroom could not be opened at the same time, and the shower could not be used at the same time as the sink. On the plus side, breakfast (included) is an elaborate affair with meats, eggs, cheeses, juices and sweets in abundance. And given the price of food in this city, I suggest taking full advantage of it; you’re going to need it getting around by foot all day. 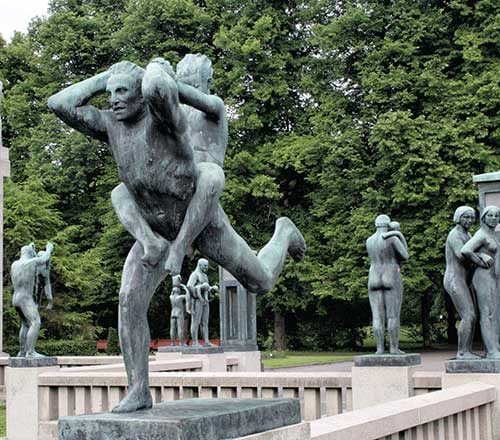 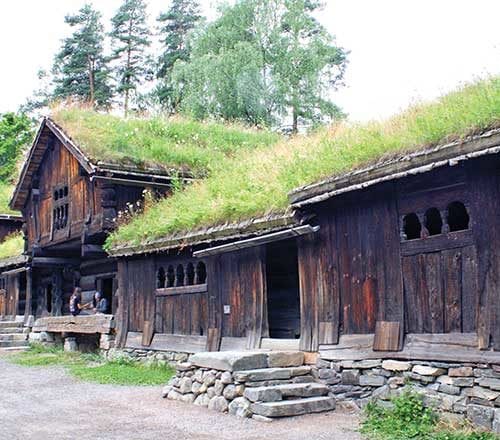 Sod-roofed home at the Folk Museum 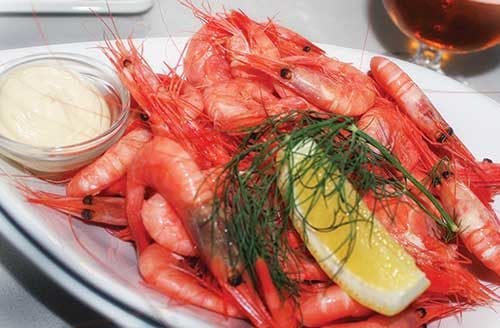 One of Oslo’s pretty squares 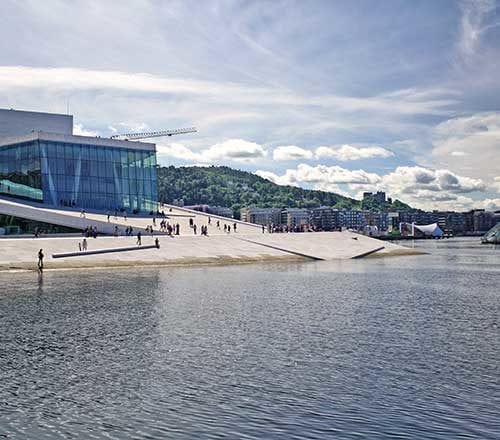 Article Name
Travel: Oslo
Description
Two things are indispensible for a trip to Oslo: your stamina and your charge card. The first is needed to traverse the fascinating, but far-flung sites; the second to cover the considerable sums needed for sustenance along the way.
Author
Dorothy Weiner
Publisher Name
TownAndStyle.com
Publisher Logo