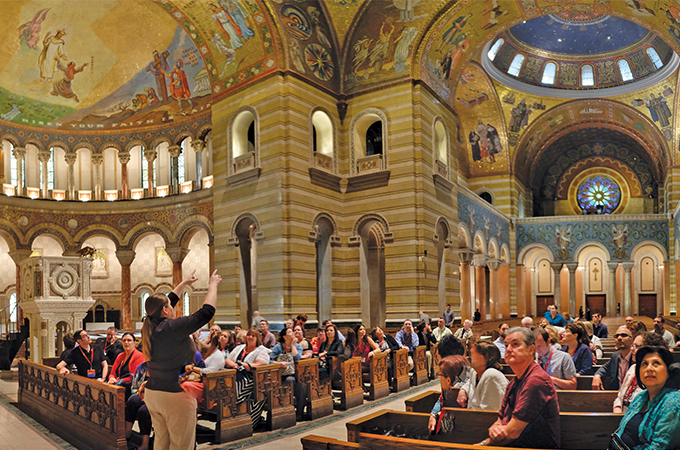 We can travel around the globe visiting beautiful churches, but one of the most striking is right here in St. Louis. The Cathedral Basilica of Saint Louis, known locally as the New Cathedral, draws visitors from all faiths and backgrounds.

Communications specialist Nicole Heerlein says the century-old Catholic church was intended by the Archdiocese of St. Louis to be grand but welcoming. The late Archbishop John Glennon wanted it to be unlike any other church in the world, she notes. Its interior is home to a huge collection of intricate mosaic imagery—41.5 million glass tiles, to be exact—so it’s a mecca for people interested in art and architecture as well as religion.

Heerlein says the mosaic artwork is so extensive that it wasn’t finished until 1988, nearly 75 years after the cathedral’s construction was complete. A special red pigment representing the blood of Christ was created just for tiles in the church’s Blessed Sacrament side chapel and its hallway. “Afterward, they destroyed the color recipe so it couldn’t be copied elsewhere,” Heerlein notes. The church’s interior tilework depicts scriptural passages, natural scenes, saints and other spiritual imagery. The cathedral also features stunning stained glass windows by Tiffany & Co., which was involved in creating the mosaic artwork as well.

The cathedral’s domed exterior was designed in the Romanesque tradition, and the interior is a combination of Byzantine and Italian styles, Heerlein says. “It’s an amazing structure that appeals to visitors of all kinds. Anyone can come for a tour, sit for a quiet moment and pray, or enjoy holiday decorations or special musical performances. There’s so much to do.”

Choral and instrumental concerts are an important part of the church’s calendar. “Christmas at the Cathedral is our biggest concert of the year,” Heerlein says. “We often feature our own Saint Louis Symphony at events here, and over the years, we’ve hosted groups from other countries, like Germany, Russia and Poland. In the spring, we’ll have the Tallis Scholars, a British choral group performing the works of Renaissance composer Thomas Tallis.” Other recitals showcase the power of the church’s 7,621-pipe organ. Special events and concerts can be found online at cathedralstl.org.

Tours of the cathedral can be self-guided or docent-led. “We’ve had guided tour groups as large as 250 guests,” Heerlein says. “People are intrigued by the space. It’s a unique place to listen and learn.”

when » Open 7 a.m. to 5 p.m. daily; holiday hours vary
where » 4431 Lindell Blvd.
why » To serve as the spiritual center of the Catholic Archdiocese of St. Louis