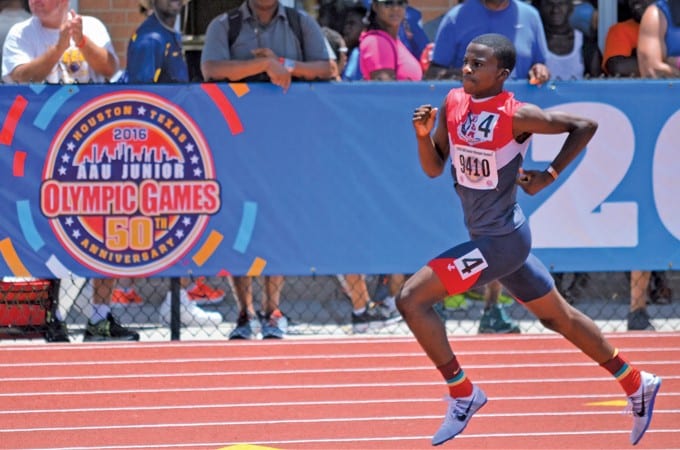 record breaker: brandon miller
Brandon Miller, a freshman at John Burroughs (pictured above), was sitting at Saint Louis Bread Co. flipping through his phone when he decided to search world records, track, kids. As he scrolled, he looked for the 800 meters—his favorite race.

“Track has always come naturally for me,” he says. “I enjoy doing it.” Coached by his mom at the Ultimate Speed Academy, Miller has athletic genes. His mom, Angela, ran track at Mizzou. His dad, Derrick, played football for the Tigers. The two met in the Mizzou weight room and are now their three kids’ biggest fans.

Miller is participating in varsity sports at John Burroughs for the first time. He has found early success in cross country, finishing third in his first meet and first place in his second. In the winter, he’ll be a point guard on the basketball team. “I like basketball and it keeps me a normal kid, because I don’t want track to be my job right now,” he says. “I like being a teenager and all the things that come with it.”

His goals reach far beyond high school though. As he watched the Olympics in August, he eyed the track events closely. He studied Kenya’s David Rudisha, a two-time gold medalist and 800-meter world record holder. “I like watching him run, especially because I might be racing him in four years,” Miller says. “I want to go to the Olympics in 2020 in Tokyo. I want to be the G.O.A.T—the greatest of all time.” team player: whitney williamson
Even with a mom who played field hockey at Denison, MICDS senior Whitney Williamson says the sport did not come naturally to her when she started playing in second grade. “It was definitely a challenge in the beginning,” she says. “But I got the hang of it because I had all my best friends playing with me, so that really encouraged me to practice and work on getting better.”

She hopes to find similar friendships and comraderie at Northwestern, where she verbally committed to play field hockey and plans to pursue a career in sports journalism. Northwestern is currently ranked 16th in the nation in field hockey.

“When I visited the campus, I knew it was for me,” Williamson says. “It’s beautiful; I could see the skyline of Chicago. It has a great journalism school, and everyone on the team embraces the same characterstics I value—team chemistry and helping each other.”

Many of her current teammates at MICDS have played alongside Williamson since she was in second grade. Success has followed them. The team has won the last three Midwest Championships. “Twelve seniors left last year, so we have a new team,” she says. “My two best friends are co-captains with me, and we’ve been really trying to stress the importance of team chemistry.”

Williamson helped lead the team to its first three wins, scoring seven goals and notching one assist. She has transitioned to a role as midfielder this year after spending most of her career at forward. “Scoring goals is always nice, but assisting is equally satisfying,” she says. “And from midfield, I have more opportunities to do that.”

As a two-sport athlete, Williamson will focus on lacrosse in the spring, where she has helped lift MICDS to three State Championships. talk to…tony adams
When SLUH defensive back/wide receiver Tony Adams quit playing football in seventh grade, his plan was to focus on basketball. The SLUH football program and longtime coach Gary Kornfeld drew him back his freshman year, however. Adams, who verbally committed to play football at Illinois next year, has never regretted it.

Q | Why did you choose Illinois in August?
A| I had 19 offers, and at first I was going to wait until the season was over to make my decision. But there started to be a lot of pressure at the beginning of the season, and I wasn’t putting the team first because I was thinking so much about my college choice. So I decided the best thing to do was make my choice and then focus on helping the team reach State.

Q | What are you most excited about with former Bears coach Lovie Smith, now the head coach at Illinois?
A| It’s crazy. I think I’ll live up to my potential. I think he’ll push me to my limits. It’s exciting and humbling.

Q | What would it mean to reach State your senior year?
A| It would mean everything. To win it for Coach Kornfeld would be huge. He’s retiring this season (after 29 years as head coach).He is already a legend, but to send him out as a state champion would just add to his legacy.